The Falkland Islands is an archipelago of some 750 islands lying at 52°S in the South Atlantic, some 350 miles NE of Tierra del Fuego. With a population of around 3,000 it is a self-governing independent Overseas Territory of the UK. It is an island paradise, where the wildlife comes to you, and that’s why we visit! In some ways it is remarkably similar to Orkney: friendly locals, a windswept, treeless landscape, with great scenery and sea-scapes, big skies, and lots of wildlife. 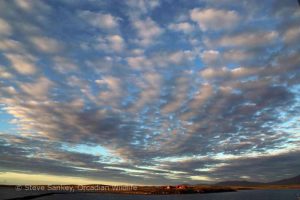 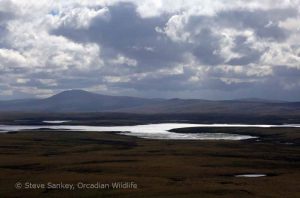 You can expect to see five species of penguin (gentoo, Magellanic, king and rockhopper, with Macaroni as a bonus) with ease at extremely close quarters with six metres being the recommended distance. But in reality if you sit still, penguins will come much closer to you than that, so bring your wide-angle lens! Other birds that are unusual include the two endemic species – Cobb’s wren and the Falkland steamer duck (called Logger locally), but there are an additional 12 sub-species of birds unique to the Falklands. 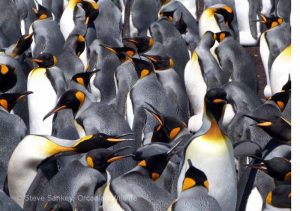 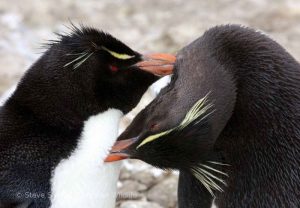 The Falkland Islands is responsible for much wildlife of global importance: over 70% of the world’s black-browed albatrosses; and the world’s largest populations of gentoo penguins (30%) and southern giant petrels (40%). It is also critically important for the conservation of striated caracara (called Johnny Rook locally), ruddy-headed geese, white-bridled finches and tussac birds, all of which are either seriously threatened or have very restricted distributions in South America. There are 175 native species of higher plants with 14 endemic species; and even wingless insects adapted to the windy environment and found nowhere else. 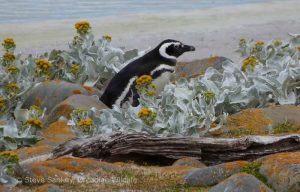 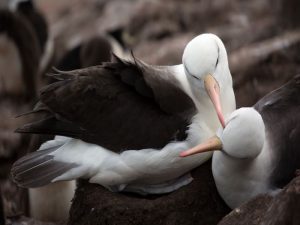 One reason we visit, however, is to watch and admire the sea mammals and cetaceans.

You are guaranteed safe but close views of both sea lions and elephant seals, and if you are lucky you may see both Commerson’s and Peale’s dolphins and even Sei whales and orcas. On Saunders Island and West Point Island (accessed from Carcass) you will also enjoyed close and breath-taking views of the magnificent black-browed albatrosses. 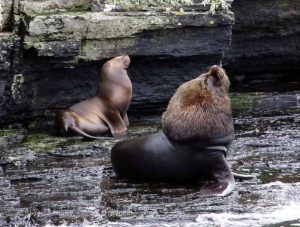 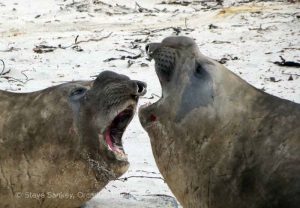 We visit a series of islands – usually four – and the capital and main town of Stanley. You will visit both East and West Falkland, and enjoy flying across the archipelago in small Islander aircraft (as used in Orkney) operated by FIGAS, the Falkland Island Government Air Service. Accommodation in ‘camp’ (the islanders’ term for the wider countryside, from the Spanish word ‘campo’) is simple but surprisingly comfortable. Our itineraries are put together by our partners at Falkland Island Holidays, with advice from Falklands Conservation. We use a combination of island guides plus myself to help you to get the most out of your visit to a unique destination. For our next tour (our 3rd) we are visiting in October to see the huge male Elephant seals fighting for control of the females: the ‘Beachmasters’. Returning albatrosses and penguins will also be displaying vividly at extremely close quarters – not to be missed! 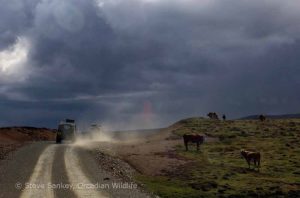 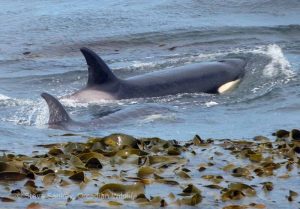 Group size is only a maximum of 6. Cost £tbc per person excluding the RAF ‘Airbridge’ from Brize Norton. A single supplement of £tbc will apply if applicable.

For further general information on the Falkland Islands see www.falklandislands.com

To find out more about the work of Falklands Conservation, to join, or even to adopt a penguin see www.falklandsconservation.com

Enquire here for a detailed itinerary or for an informal chat please phone Steve on 01856 831240. 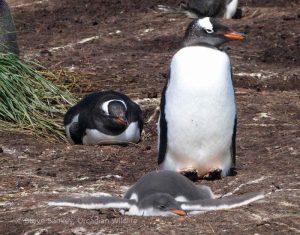 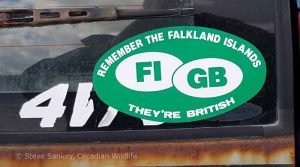 14 January 2019 – in transit from RAF Brize Norton to Mount Pleasant, FI by way of a re-fuelling stop in Cabo Verde. We agreed that the RAF Airbus 330 was a spacious and efficient means of getting there, with the bonus of endemic Lago sparrows hopping around Cabo Verde airport! An overnight sleep at Darwin Lodge on arrival, followed by a leisurely local walk around Colonel H Jones’ memorial in the morning was a perfect introduction to the common birds of the FI: Austral thrushes, crested ducks and ruddy-headed and upland geese. Long-tailed meadowlarks added some colour, and European brown hares were wonderful at close quarters. Our first FI endemic – the Falkland steamer duck (or ‘logger’) gave great views, with their groups of ducklings.

15-17 January – to the far NW for 3 nights at the self-catering cabin at the Neck, Saunders Island, as spectacular a place as I’ve ever seen! Our transfer flight in poor visibility low over the bogs and stone-runs of West Falkland, and including the spectacular chicane of the Warrah River was breathtaking. Huge cloud banks both sides of Elephant Point as we arrived added to the excitement. The nearby black-browed albatross; Imperial cormorants; and gentoo, king, Magellanic and rockhopper penguin colonies gave hours of entertainment. Commerson’s dolphins rode the surf offshore, and the usual predators of Falkland skuas, striated caracaras and turkey vultures caused mayhem in the colonies. A small but growing colony of c 20 king penguins is a star attraction.

18-20 January – back south again for 3 nights on Bleaker Island, a popular venue with all. Great accommodation, sheep shearing, and a large 8,000+ Imperial cormorant colony along with their sea lions, gentoos and rockhoppers gave us plenty to see. We spent a day out west at Cassard Point, seeing Peale’s dolphins, a pair of Southern caracaras with a newly fledged youngster, and several colonies of Southern giant petrels. On prominent display amidst the rockhoppers was a large and incongruous Macaroni, which completed our set of the 5 species of FI penguins!

21-22 January – further South still, to the ever-popular Sea Lion Island, with yes its sea lions, but also elephant seals and various penguin colonies. We had an evening foray to watch a family of short-eared owls, including a fledged youngster close above the Landrover, and the grey-backed storm petrels arriving ashore into the tussac grass. Early morning light at Elephant Corner was magical, with gathered Magellanic penguins braying and young male elephant seals strutting their stuff. The tussac and surrounds gave us our 2nd endemic – the Cobb’s wren – and also black-chinned siskin and white-bridled finch. Several white-chinned petrels offshore playing the gale along with albatrosses.

23-24 January – back to Stanley, the FI capital, where a full day was spent admiring the 2,000 pair strong colony of king penguins, having crossed the diddle-dee by 4WDs. En route we saw the unusual stone-runs of Mount Kent, and a strong showing of sooty shearwaters in Berkeley Sound.