Orkney is one of the best places to see whales & dolphins in the UK, and over the past 18 seasons we have recorded 12 species. Some are commoner than others, and as a result are easier to observe. Some are simply more difficult to see as they prefer to keep well offshore in deeper water, more to do with habit than size, as the bigger whales such as Humpback and Sperm will often visit Scapa Flow. The Summer season from May onwards is when most animals are seen, although they can visit year-round. The three key elements to successful cetacean spotting are (1) a good sea-state (2) a good vantage point and (3) patience, or shall we say luck!? The pictures below show Humpback baleen; a Minke; Humpback pleats and flipper; and a Sperm Whale blow (note the 45° angle).

We watch for cetaceans from tried and trusted land-based headlands, relying on a good sea-state and our local knowledge to try and encounter some animals. Harbour Porpoise can be almost guaranteed in good conditions, whilst Orca can be more unpredictable and therefore frustrating! Hoxa Head on South Ronaldsay; Marwick Head in West Mainland, and Noup Head on Westray are three favourite cetacean-watching spots, and have given us lots of enjoyable observations over the years. In reality cetaceans can pop up anywhere, and frequently do! The pictures below show a Sperm Whale fluke; an Orca; and Risso’s Dolphins ‘spyhopping’, and their dorsal fins and tail fluke.

Minke Whale: Reasonably common, though some years are inexplicably better than others.

Fin Whale: Rare. I’ve only seen this species once in Orkney, a family group passing through the Pentland Firth and ‘scoped’ from Hoxa Head. Sadly two strandings in Scapa Flow occurred in two consecutive years, 2019 and 2020.

Sperm Whale: Usually seen every couple of years or so, mostly in Scapa Flow, although one famously turned up in Kirkwall Harbour on 12 October 2011, spent a day being admired by many locals, then headed back out to sea.

Long-finned Pilot Whale: Difficult to see owing to their preference of offshore waters. In 2019 a pod spent a few days in and around Kirkwall Harbour, possibly because of an injury to one of their number.

Orca (Killer Whale): Common though unpredictable. Several pods visit each year, which can be identified by their dorsal fins and other markings, who travel between Iceland and the Northern Isles. True Vikings!

Common Dolphin: Not as common as its name suggests, but seen irregularly, sometimes in large numbers.

Bottlenose Dolphin: Usually seen alone or in small groups, perhaps straying North from their base in the Moray Firth.

Harbour Porpoise: Easily our commonest cetacean, but they’re small and sometimes hard to see, requiring a good sea-state. Each Autumn large numbers gather in Switha Sound to the south of Scapa Flow for reasons we don’t understand. Pic of Orca splash below. 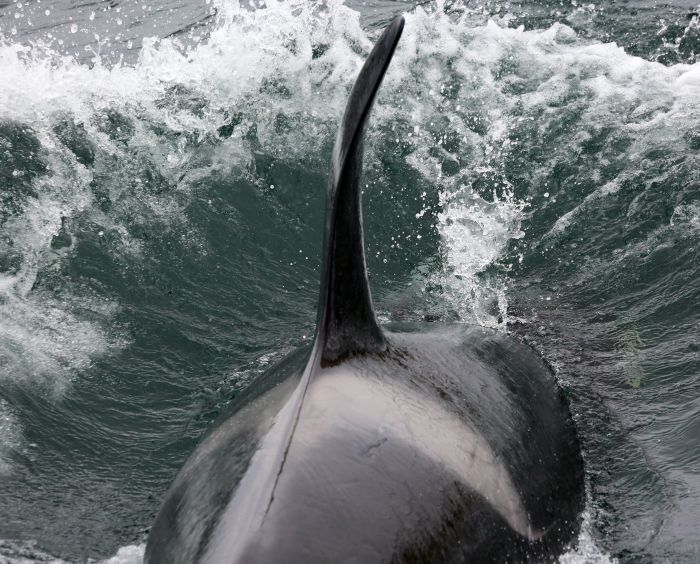 If you would particularly like to try and see cetaceans in Orkney please let us know on booking. Please be aware that although Harbour Porpoise and Orca are reasonably common in Orkney, we can never guarantee sightings! Orca can be especially elusive, although the joy on seeing these animals is unrivalled – guests have cried with emotion on seeing orca for the first time! To put things into some kind of perspective, we see Orca on around every other tour if we prioritise them.

Other pictures of cetaceans in Orkney may be seen in my photogallery here, or visit Orkney Cetacean Sighting’s Facebook page.