Orkney’s position at 59°N, straddling the very edge of Britain, and lying between the Atlantic Ocean and the North Sea makes it a particularly attractive place for migrants of all kinds. Our proximity to Norway also makes it difficult to decide sometimes whether certain migrants – such as sea eagles – are genuinely Scottish birds or Scandinavian migrants. After all, we are on the same latitude as Oslo, and as close to Norway as we are to the English border.

And so when our pair of sea eagles settled down to nest on the island of Hoy in 2015 they became Scotland’s 100th pair – quite an accolade! Prior to these centurions, the last pair in Orkney nested on Hoy in 1873, so it is fitting and proper after their Victorian persecution that they have returned to breed once more. Old breeding sites allegedly even included the Old Man himself; their current eyrie on the Dwarfie Hamars; and other sites elsewhere in Orkney such as Costa Head on South Ronaldsay. Viewing the pair at their current site from the Dwarfie Stane car park is straightforward, and under the supervision of RSPB staff and volunteers. You are easily able (with patience!) to get good views of the adults safe in the knowledge that you are causing absolutely no disturbance to this rare and majestic symbol of Orkney’s wild sea-scapes. The birds failed to breed successfully during the 2015 – 2017 seasons, but this isn’t unusual for a young and inexperienced pair. I’m delighted to report that I was the first to confirm that they in fact hatched two chicks in 2018! A statement from RSPB Orkney issued on 13 June 2018 said:

“It has been a long time coming, but we are absolutely thrilled to confirm that a white-tailed eagle chick has hatched in Orkney for the first time in 145 years. We’ve visually confirmed one chick, but the parents’ behaviour indicates that there could even be a second. Since the eagles returned to Hoy it’s been a roller coaster ride of failed nesting attempts, new pairs and even abandonment of the territory. However, hopes were high when a new pair started nesting in the spring and showed signs of having a clutch. Having kept our fingers crossed for weeks on end, we finally spotted the chick on a recent observation of the site. It will likely be a few more weeks before we have clear, regular sightings of the chick (or chicks) as they normally remain in the nest for up to 14 weeks.”

The pair started the 2019 season with another 2 chicks but sadly the smaller one died in the poor weather of early June. The remaining chick fledged successfully and was named by the Hoy schoolchildren as Greselda!

The news from Spring 2021 is unfortunately less favourable in that one bird is missing, probably the male, and the female is wandering around with one of her juveniles and so has made no attempt to nest. Let’s hope that an unattached male wanders by.

All the images and pictures on this page unless credited are reproduced courtesy of one of the most special places in Orkney: Isbister chambered tomb, much better known as the Tomb of the Eagles. 5,000+ years ago, in Orkney’s Neolithic prime, this southern area of South Ronaldsay was home to a tribe with a particular affiliation with sea eagles. We know this because in their communal tomb, the bones of their ancestors were buried alongside the talons and beaks of sea eagles.

According to archaeological evidence, it seems likely that tribe members who died at Isbister were given a ‘sky burial’ or left on an excarnation platform for the wild birds to strip the corpses clean of flesh. Birds such as sea eagles, ravens, craws, kites, bonxies and gulls would all have completed this task, to leave but a skeleton. Afterwards, the principal bones were installed into the chambers at Isbister for the tribe to honour and remember as they saw fit (and about which we know very little). If Isbister tomb was in use for around 800 years, this would mean around 24 generations of tribes-people and eagles would have been buried there!

Unfortunately the Tomb of the Eagles on South Ronaldsay closed in 2021 as the family-run business owners retired, but it is hoped that new arrangements for the 2022 season will be put in place for the years ahead. 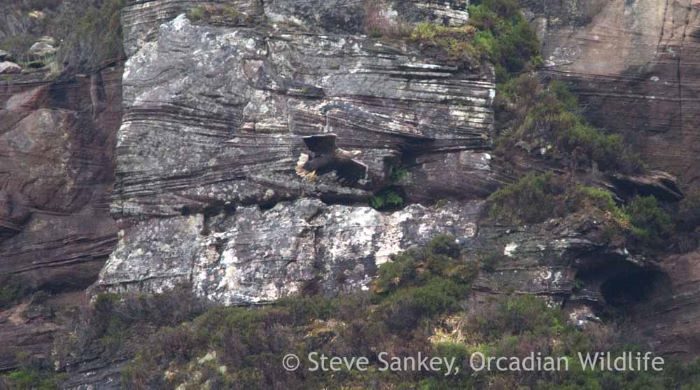